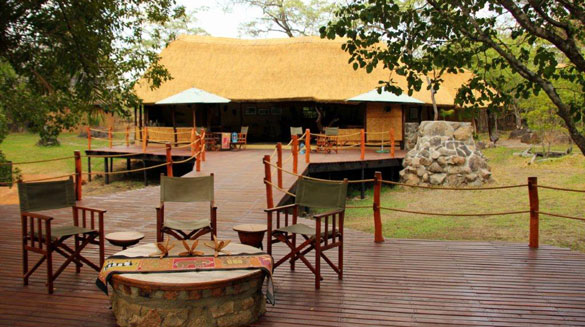 We have some exciting news to share with you concerning our properties, and not forgetting our summer special, allowing guests to experience 3 nights for the price of 2! Don’t delay; this offer expires along with the 5 Rivers special at the end of March.

Both Ntwala and Impalila Island lodges, on the edge of the Caprivi where the four countries meet, are enjoying a large amount of rain at present. The resultant lush vegetation surrounding the lodges has lead to a number of exciting wildlife experiences, especially with the magnitude of breeding summer birds and interesting hippo and elephant behaviour. The largest Tiger Fish caught so far in 2012 is a 7.4kg beauty. The truly African thunderstorms bring with them cool refreshment from the warm summer days, and breath-taking sunsets, best viewed from the lodge decks with equally refreshing sundowner cocktails in hand.

The magnificent Black Cheeked Lovebirds have reportedly been spotted flying over Ntwala again – although this requires confirmation, it is not outside the realms of possibility as they are fairly common in the Kafue National Park south of Kaingu. We are hoping to confirm this rare sighting of these beautiful birds this far south of the Zambezi. This confirmation will add to the ever-growing list of incredible bird species found in this area.

The Impalila Conservancy Agreement has been signed by both Ntwala and Impalila and the relationship between the lodges and the local community is as strong as ever. The new primary school classrooms have been completed and have been taking their first pupils as of January 2012.

After 10 years of creating unique safari memories for cherished guests, Kaingu Safari Lodge is undergoing a complete facelift. The lodge is currently closed for renovations and is set to re-open on the 01st April 2012. These renovations will include the building of a new teak viewing deck extending over the water and into the tree line. The main lodge area is also set to be updated and refurbished to create an area for guests to relax between the variety of activities on offer. All guest chalets are being upgraded to include additions such as sitting hammocks and improved lighting ensuring that guests can laze away in comfortable surroundings in the privacy of their own rooms. The Fin foot Villa (Family unit) has been given new lighting, a renovated deck plus the front window levels are being dropped so that guests can watch the river from the comfort of their beds.

New environmentally friendly and aesthetically pleasing low energy pathway lighting has been installed, making it convenient and safe for the guests as they wind their way back to their chalets after dinner and fireside drinks at the end of an activity filled day.The Kafue River and especially the sections above and below the Lodge are truly spectacular, with many forested islands and narrow channels to explore for birding, fishing or just soaking up the beauty of the area in a complete isolation. To appreciate this pristine river, Kaingu has also invested in new, quieter and environmentally friendly 4-stroke motors on boats customised for fishing, birding or simply cruising the river.

Wildlife – Guests of recent have been spoilt by large herds of Impala, Sable antelope, a territorial pack of Wild dog and many sightings of leopard, just to name a few. The first sighting of leopard this year was of a mother and her half grown cub, she spent 10 minutes watching the vehicle and its occupants before moving off into the bush. The second sighting was the following day when she was spotted at 11:00 on a pathway between the chalets whilst stalking a troop of vervet monkeys.

The large volume of rain received in this area of the Kalahari has resulted in a herd of elephants moving into the concession – very unusual for the Kalahari but a superb sighting for guests. The guests have also witnessed lions mating, along with numerous sightings of other cats in the last two weeks. DVL is reported to look like an animal nursery school at the moment as many of the herbivores have had their calves. Young hartebeest, Oryx and wildebeest can be seen running around for the most part of each day.

It has been an incredibly special time at Susuwe as far as game sightings in the surrounding Bwabwata National Park are concerned. The park is teeming with game and guests have had the pleasure of two separate sightings of leopard. One sighting was of male leopard that lay on a horizontal branch and gave our guests a relatively unheard of forty-five minutes of photography time. Another spectacular sighting was that of three lionesses, one carrying a cub in her mouth and another walking gracefully with her 3 cubs. The lioness carrying the cub placed her little one down and proceeded to collect a duiker kill, which she had recently taken down behind a small cluster of trees. The elephants in the area are slowly moving in large numbers towards Horseshoe bend on the Kwando River.

Head Office and Windhoek Office
Islands In Africa is pleased to welcome Frans Vermaas to the Team. Frans is joining us as Head of Operations throughout the group and will also be assisting in the management of the Ndumo project in Kwa Zulu Natal, South Africa. We have updated our image gallery on our website. Please also visit our website for more images of Kaingu’s refurbishments.
Visit for a time, reminisce for eternity. Please contact reservations@islandsinafrica.com for more information.