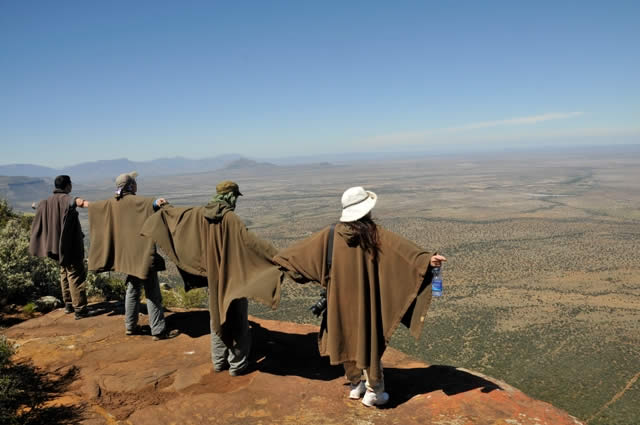 OUR LATEST NEWS & EVENTS FROM SAMARA

It is truly wonderful to be back at The Manor House. After nearly three years and such a treat to be able to share it with friends. We arrived in the pouring torrential rain and spent an extremely relaxing afternoon drinking hot chocolate by the fire. We had a fabulous drive and walk with Test and we were lucky enough to find Sibella. We have been incredibly well looked after by all the charming staff and Karen has fed us unbelievable well. Oh want to stay longer…. Albee Yeend

A very relaxing holiday, we were treated with good food, interesting drives and the staff is very knowledgeable and friendly. We will be back! Martin, Erin, Lydia and Louis Snyman

What a wonderful piece of paradise you have here. We will be back for sure! Thank you for all you done for us. It was like heaven! Phillip Wicki and Rebecca Veronica Melardi

The farms that make up Samara used to be areas where caracal were treated as vermin. Once it became a game reserve, caracal were free to enjoy their freedom once more and now our rangers and guests are seeing caracal on a regular basis.

The caracal, known as the rooikat in Afrikaans, is a slender, yet muscular, cat, with long legs and a short tail. Males typically weigh 13 to 18 kgs, while females weigh about 11 kgs.
Adults do not have markings except for black spots above the eyes and small white patches around the eyes and nose. The most conspicuous feature of the caracal is elongated, tufted black ears, which also explain the origin of its name, karakulak, Turkish for “black ear”. Its ears, which it uses to locate prey, are controlled by 29 different muscles.

Its life expectancy in the wild is 12 years.. The caracal may survive without drinking for a long period — the water demand is satisfied with the body fluids of its prey. Caracals hunt by stalking their prey, approaching within about 5 metres before suddenly sprinting and leaping. They kill smaller prey with a bite to the nape of the neck, and larger animals by biting the throat and then raking with their claws. Caracals sometimes cover their larger prey if they cannot consume the whole carcass in a single meal, and return to it later. Some have even been observed to hide carcasses in trees

We are about to offer a fantastic self-catering option at Mountain Retreat, in addition to the fully catered option. More news of this option in next month’s newsletter!

Early this month, we had a test run with a local family trying out this option. Here’s what they had to say:

“Mountain Retreat was a great opportunity for the family to escape the mad rush of the office and school runs and unwind in the peace of the Karoo wilderness.

My wife and I decided that, instead of bringing along our own food, we would take advantage of the Build a Basket option where we chose our meals in advance and they were delivered to Mountain Retreat ready for our arrival. Ideal for a lazy escape and giving we more time to spend together as a family. All that was required was for us to heat up the delicious meals. We opted for the braai on our evening of arrival and found that all necessities, including wood had been set up for us. We enjoyed a hearty Karoo Farm Breakfast the next morning while the kids devoured the Sweet Breakfast of pancakes, syrup and crispy bacon. The rest of our stay was divided between sun-bathing on the veranda next to the outdoor Jacuzzi. We also hiked to the Bushman Cave to view the ancient rock art and took an optional game drive complete with sundowners. We came home refreshed and inspired having thoroughly enjoyed our special time together in such a magnificent setting and have renamed Mountain Retreat, Mountain Replete after all the delicious food.

South African Tourism recently hosted a group of international journalists at Samara. The group were in awe of the breathtaking views from the mountain top and bravely posed for a photo on the edge of Eagle Rock.

Samara shares the magic of Christmas

Once again Samara will be hosting the children of the Vuyani Safe Haven, Graaff-Reinet for a Christmas Party. Vuyani is a place of safety for girls and boys up to the age of 18, who have no home or who have been removed from their parents due to abandonment or abuse.

The 2010 Christmas party was a huge success. Many Boxes of Joy were donated by Friends of Samara and these received with great delight by these children who would otherwise have missed out on the magic of Christmas. The sight of these children enjoying themselves and interacting with Father Christmas was very rewarding to everyone involved.

How Friends of Samara can contribute is to put together a “Box of Joy” – a shoebox filled with small goodies for a girl or boy between the ages of 0 and 18. This gesture can make a lasting impression on a child. Alternatively, to be a part of this wonderful day of celebration, book to stay at Samara over the weekend starting 2 December and come get involved in the party! Contact Jenny reservations@samara.co.za for reservations.

We have been approached by a writer/film maker who is interested in making a film of Sibella, the cheetah who, when released on Samara some 6 years ago after suffering terribly at the hands of humans, made history by being the first cheetah back in the Karoo in 125 years. As many of you will know, she has produced and successfully raised 3 litters of cubs thereby contributing a total of 17 cubs to the endangered cheetah population of South Africa. She has inspired so many of our guests that she must rate as a superstar.

We are asking anybody who has either still photos or video footage of Sibella with her cubs, to please send these images/footage to Hayley who is writing her Masters degree on cheetah – volunteer@samara.co.za

Sibella’s story deserves to be told so that she can go on to inspire many, many more people.