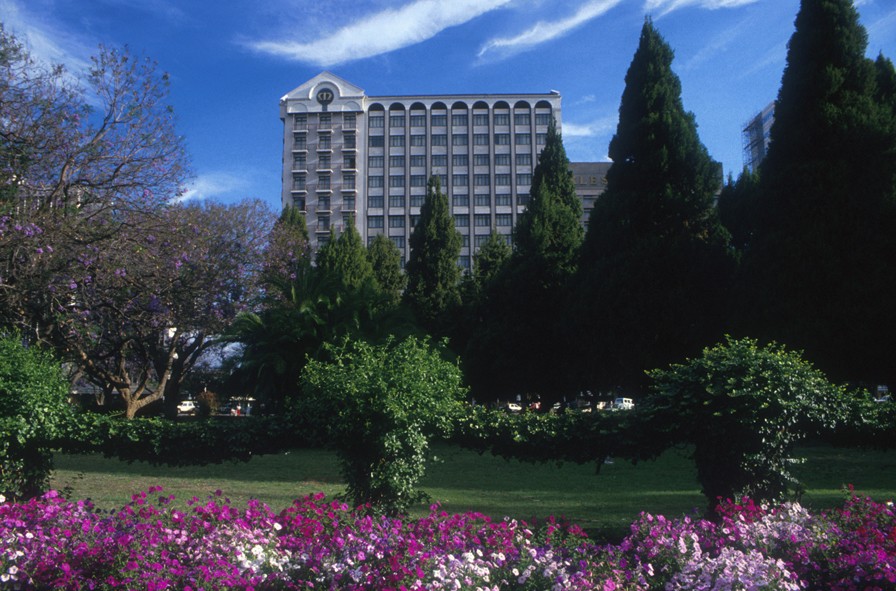 When you step into the elegant foyer at Meikles, you’ll know you’ve made the right choice. The smartly-turned out, professional and warmly welcoming staff, the smiles and efficiency, the meticulous attention to detail, the furnishings and ambience, the grand piano being quietly played to guests relaxing over coffee and cakes, tells you why Meikles continues to win the coveted title of Best City Hotel in Zimbabwe.

This luxurious hotel, which was invited to join The Leading Hotels of the World in 1995, overlooks the lush lawns, bright flower beds and avenues of trees of Africa Unity Square, in the heart of the vibrant city of Harare. Since it’s inception in 1915, Meikles has been the first choice of international businessmen, dignitaries, diplomats, upmarket tourists and even royalty who expect the highest standards in accommodation, cuisine, security and 21st century communications facilities.

Meikles’ quality of service is endorsed not just by membership of The Leading Hotels of the World but also by being the first hotel in Africa to achieve ISO 9002 certification; by winning in February 2001 the coveted title of Best City Hotel in Zimbabwe for the ninth year in succession, and by winning a number of international awards including Best Hotel in Africa.

Meikles is a landmark in central Harare, its two wings offering guests panoramic views across the city. Within those two wings is an exceptional choice in accommodation, from comfortable, well-appointed rooms to two-bedroomed luxury suites.

Meikles has a well-earned reputation for the excellence of its cuisine. Three restaurants offer superb menus including a traditional grillroom, French cuisine and a lavish buffet restaurant and terrace alfresco coffee bar.

Guests also have the use of the keep fit centre, saunas, rooftop pool deck, a hairdresser, health salon and golf club membership. A 24-hour business centre provides a comprehensive range of services including word processing, email and internet, scanning and faxing. Meikles is an ideal venue for conferences and functions, with venues available for functions from as small as 10 to more than 200 delegates.

Experiencing the historic, cultural, wildlife and scenic delights in and around the city is easy, as accredited touring companies have desks within the foyer that offer an exciting selection of activities.

Fancy riding an elephant, visiting the world’s largest tobacco auction floors, a wine-tasting tour, taking a half day city tour or seeing a silversmith at work? These and many more wonderful experiences are awaiting you at Meikles…

The long-planned $7,5 million refurbishment of Harare’s five-star Meikles Hotel will start in March, when the hotel’s north wing will be closed for a period of about nine months to allow a complete overhaul and refashioning all the suites, bedroom, gymnasium and public areas, as well as substantial refurbishment of working areas and equipment such as kitchens, laundry, elevators and generators

Karl Snater, managing director of the hotel, said this was the biggest upgrading programme in the hotel in almost 20 years and would see the north wing achieve a state-of-the-art, international five-star-standard.

During the past year the hotel has undertaken a number of upgrades and improvements, including installation of flat-screen televisions in all rooms and suites, acquisition of new banqueting furniture and equipment, painting of the exterior of the hotel and remodelling of the principal banqueting venue, the Stewart Rooms. In addition, new management has been appointed in key positions, especially in the food and beverage operations, tasked with introducing new menus and wine lists and making improvements to systems and procedures.

The major refurbishment that starts in March will be the first phase of an exercise that will in due course also involve the hotel’s south wing. In drawing up a new look for the hotel’s accommodation, the creative team has come up with designs that blend the boldness of Africa with the glamour of the 21st century.

“In the bedrooms and suites, there is an emphasis on pride in Zimbabwe and Africa, with an array of bespoke hand-painted fabrics, honouring the traditional designs of this area, and bringing them to life in a refreshing and compelling manner,” said Mr Snater.

“The renovated bathrooms also carry innovative design: slabs of African Nero Granite with sandblasted patterns. Interwoven with this textural sophistication are African artefacts, showcasing the talent evident in Zimbabwe today. The new-look Meikles will be both spectacular in scale and in detail.” Mr Snater said the refurbishment programme was based on a belief that travel and tourism would expand and grow in the medium term.

“Along with our many colleagues throughout the sector, we look forward to increased interest in Zimbabwe as a destination for travellers of all kinds, especially in the upper end of the market, which is where Meikles is positioned as the natural and first choice.

“What must be acknowledged is that, although we have survived the past 12 very challenging years and are ready to meet the future with strength and energy, Meikles Hotel, in common with all operators within the sector, must now address issues of a physical nature and must undertake investment and expenditure to bring its infrastructure up to the highest possible standard and create for itself a fresh new look for the 21st century that matches the keen and warm welcome extended to customers.

“The major refashioning of the entire hotel will prepare it for what we hope is a brighter and busier future and allow this hotel to retain its reputation for building on a solid foundation of experience and tradition while utilising innovation, imagination and creativity to give our guests an experience that is unmatched in this market.