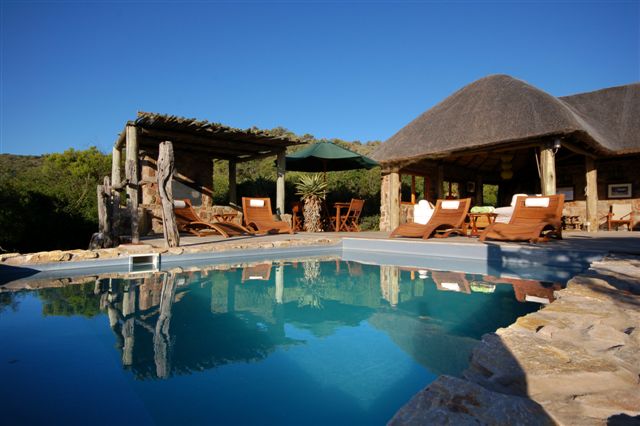 Nestling on the banks of the Bushman’s River with a breathtaking vista of rolling African plains, lies HillsNek Safaris. An intimate, family run safari lodge situated in a secluded corner of the pristine, malaria free Amakhala Game Reserve of the Eastern Cape.

The main lodge and three private luxury safari tents are elevated on wooden decks overlooking the vast panoramas of the reserve and embracing nature’s daily ebbs and flows.

Let HillsNek Safaris be your ultimate home from home in the African bush, where you can live out your dream safari experience with no compromises…

The stone, canvas and thatch main lodge offers an open plan lounge and dining room, an adjacent bar and seating area extending out onto an open deck make the best of the spectacular surrounding landscape.

The solar heated swimming pool offers a place to relax and a chance to enjoy the best of the African sunshine while watching wildlife casually traversing the plains.

Three individual luxury canvas safari tents set on expansive wrap around wooden decks command panoramic views. All three tents are linked to the main lodge by raised wooden walkways. All tents are complete with an en-suite bathroom and outside shower. Modern luxuries include white percale bed linen, as well as tea & coffee making facilities. The tents are discreetly positioned, with the private decks ensuring maximum privacy and tranquility.

As you leave HillsNek in the Land Rover game-viewing vehicle, you will be traversing an area of over 18 000 acres, weaving through 5 of the country’s 7 biomes. This abundant wilderness balances complex and diverse ecosystems, providing habitat for over 60 mammal species. The Bushman’s River meanders through the reserve, providing its vital life source – water – to the myriad of wildlife and birdlife.

The majestic lion, herds of elephant, buffalo and giraffe, cheetah, white and black rhino make up the big game component. The reserve is also home to substantial herds of plains game species including zebra, black wildebeest, red hartebeest, oryx and eland, amongst others.

As night falls the nocturnal animals begin their foraging. From the secretive aardvark to the rare brown hyena, you may just be lucky enough to encounter these shy yet interesting mammals as you make your way back to the lodge.

HillsNek Safaris is committed to the conservation of the Southern White Rhino Ceratotherium simum as well as the preservation of a unique palaeontology site on the reserve:

The story of the white rhino in Africa is one of the most successful conservation projects of all time. HillsNek Safaris in partnership with the Amakhala Conservation Center has implemented an intense daily monitoring and data recording system that provides the optimum support framework to protect and promote the population growth of the southern white rhino in Africa. A dedicated anti-poaching team also ensures that our rhino are continually accounted for.

HillsNek Safaris is situated adjacent to a topographically diverse section of land that is the resting place and sanctuary called “Iguanodon-hoek”, the 1845 fossil site of Paranthodon africanus, the very first South African Dinosaur discovery. Restricted access assists our efforts in the preservation of this sensitive and historical site.